I was on an airplane last Friday and ordered a cup of tea when the stewardess came down the aisle.  I like tea in the afternoon and I like it with milk.


She handed me the cup of tea and two little plastic packages of non-dairy creamer.  Due to sixteen years of living with celiac disease, out of sheer habit I read the label.   It seemed gluten-free and it also seemed like a whole lot of “yuck.”  The “contains” label said that soy and milk ingredients were present and my inner voice asked, “Where?”
Here is what was in my little plastic container of non-dairy creamer.  My apologies for any misspellings, mouse print labels are very tough to read even with glasses. 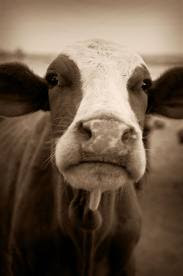 All I really wanted was a splash of milk to cool off my tea and lighten it a little bit.  I asked her if I could have milk and she didn’t have any on her cart.  So the choice was to dump the two plastic packets of chemicals into my tea for a milk-like flavor or drink it black.


The non-dairy creamer was safe to consume from a gluten perspective, but totally gross from every other perspective.  I drank half the cup black and switched back to my water bottle.  The moral of the story for me is that sometimes reading labels can turn you off a product completely even if it is gluten-free!

A yogurt that contains wheat 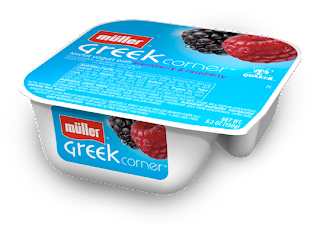 So you can imagine my surprise when I read the ingredients of Quaker's new Muller yogurt and discovered most varieties and flavors contain wheat. It's clearly labeled at the end of the ingredients list in a "Contains" statement. So while this is surprising, it's surely not hidden.

The Muller brand originated in Europe where wheat starch and modified wheat starch are used much more commonly than in the US. The products introduced to the US market by Quaker continue to be made in Germany, although a US plant is under construction. It's not yet clear whether there will be a change in formulation once the US plant opens.

Wheat starch has been allowed in gluten-free foods in Europe for a number of years. Muller notes that many of its yogurt products contain no more than 20 parts per million of gluten in accordance with European Commission  regulations for products labeled gluten free.

The proposed rules would allow foods with an ingredient made from a gluten-containing grain that has been processed to remove the protein harmful to those who have celiac disease to be labeled gluten free. However, it's not completely clear whether wheat starch or modified wheat starch would fall into that category.

The FDA has said it will finalize a gluten-free definition "as soon as possible," but it's unlikely to happen before the end of the year.

US allergen labeling laws passed in 2004 do require that any wheat used in a product has to be noted on the label. It can either appear as part of the ingredient listing, for example modified wheat starch, or at the end of the ingredients list in a "Contains" statement as in the Muller yogurt.

Since modified wheat starch is currently not considered gluten free in the US, those who follow the gluten-free diet are advised not to eat products that contain it. That means most of the Muller products in your supermarket are off limits.

And it's another reminder that no matter how familiar you are with the ins and outs of the gluten-free diet, you always have to read labels.

Across the country parents of college freshman are heading to campuses for Family Weekend. It's often the first chance they have to lay eyes on their newly independent children and make sure everything seems to be OK.

My youngest son is a freshman and so our family traveled to his university this past weekend for a tailgate, barbecue and football game. (The home team happily won). My daughter, who has celiac disease, went with us to see her younger brother. So I was glad to see that the university had posted information on foods at the barbecue that were gluten free. Even better, it turns out almost everything on the menu was.

It included hot dogs, sausages, pulled pork BBQ, BBQ chicken, baked beans, potato salad, coleslaw, and fresh fruit. Only  the veggie burgers, cupcakes and buns weren't gluten free. We did not request gluten-free items and the university's decision to make the menu so gluten friendly was prompted internally. Many foods were also dairy and nut free and several were vegetarian or vegan.

Ironically, this same university had only 11 gluten-free items on its entire dining hall menu when my daughter looked into attending about five years ago. That's not the reason she chose another school, but it was in the negative column. It was just another reminder of how much has changed so quickly.

And at the barbecue, it turns out there was even a dessert that was gluten free. My daughter was able to enjoy Rita's Italian Ice, which had set up a free stand nearby.

All in all, a very inclusive event.

And my son does seem to be doing fine as a new college student.

The end of the third quarter has rolled around and, as pretty much everyone expected, the Food and Drug Administration still has not finalized rules for gluten-free labeling.

The agency, under pressure from the gluten-free community, had said final approval would likely come by September 30. That deadline became a little less likely months ago when a presidential budget proposal seemed to move action to the end of the year.

Today, an FDA representative told me the agency is working to publish a final rule as soon as possible.

The FDA received about 2,000 new comments last year when it once again asked consumers, food makers, support groups and medical and gluten-free testing experts to weigh in on proposed rules that were supposed to be passed by 2008.

Comments now being considered by the FDA touch on many issues, including important questions about how to detect gluten in food. The FDA says the gluten-free definition remains "a high priority."

"If a petition on the website gets enough support, White House staff will review it, ensure it’s sent to the appropriate policy experts, and issue an official response," the website says. A petition has to get 25,000 signatures within 30 days to trigger review. You can read more about the gluten-free labeling petition on the American Celiac Disease Alliance website.


A strong push for FDA action came last year when 1in133, a grassroots group, drew attention to the long ignored gluten-free labeling proposal by building the world's tallest gluten-free cake at an event in Washington, D.C. Mike Taylor, FDA deputy commissioner, promised to "get it done."

The FDA then reopened public comment, saying it was looking for information on any new developments in research or testing that might impact a final gluten-free labeling law.

Currently there is no precise definition for the gluten-free label aside from a general requirement that food labels have to be truthful. Wheat, barley and rye cannot be used as an ingredients in foods labeled gluten-free. The Food Allergen Labeling and Consumer Protection Act directed the FDA to come up with better definition. In 2007, the agency proposed less than 20 parts per million of gluten from any source, including cross-contamination, as a standard for foods labeled gluten free. But progress then stalled until it was kick-started by 1in133.

It's still hard to say for certain when labeling rules will finally be passed. But it's pretty clear it's important to make your voice heard and the petition is one way to do that. 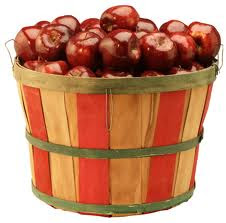 Now that we have our first contest under our belt, we want to lots of people to have fun with this topic!   How many people have plans to go apple picking over the Columbus Day weekend?  I have such fond memories of my kids when they were little going apple picking with all of their cousins.  It was a ton of work and inevitably one or more of the aunts or uncles got bopped in the head with that big picker-stick with the basket on top.


For the next three weeks we would race to use up the bushels of apples we brought home!  I was always the best cheater on apple pie…two frozen gluten-free pie crusts thawed will yield a lot of tarts or a double crust apple pie.  But, maybe it’s time to try something new….

Create a Pinterest board and fill it with your favorite tasty and creative gluten-free apple ideas. Then, head over to our Facebook page and share a link to your board for others to see until October 22, 2012. Our staff will judge each board and choose a favorite, and that Pinner will win a free one-year subscription to Gluten-Free Living and will be our featured Pinner on our blog and in our newsletters. Here's how to enter:


If you are a mom or dad who packs lunches for your gluten-free child, be sure to click on September's gluten-free lunch box winners Pinterest board.   Jordan Nicole Chapman continues to add delicious and fun ideas for any child’s lunchbox.
We can’t wait to share the apple boards with you!


Kendall Egan
Posted by Gluten-Free Living at 3:01 PM No comments: