There is something about the smell of cinnamon that makes a house feel toasty and inviting on a gray, rainy day. Our local bakery has this cinnamon-sugar swirl bread that fragrances the house better than any candle or potpourri. My wheat-eating children love it.

The bummer is that I can only smell it, not taste it! After my kids left for school today I decided to make my own cinnamon and sugar gluten-free treats. I toasted up two slices of Canyon Bakehouse Cinnamon Raisin bread. I buttered the toast and sprinkled brown sugar on top. My broiler was on and ready to go and I stuck the toast under the broiler for just a few seconds to caramelize the brown sugar.

The brown sugar is very hot so it is best to let it sit and cool for a minute. The brown sugar gets a little crackly when it cools. With enough butter and brown sugar, and the spice of the cinnamon bread, this is a decadent breakfast. My mom used to float toast like this in a bowl of warm milk when I was a kid. It was one of my favorite breakfasts. 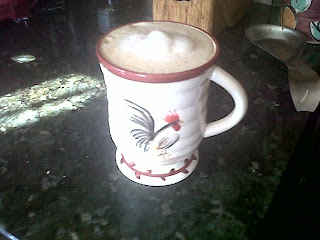 These days, I would rather have my milk warmed up and frothed for coffee, which was my second gluten-free treat of the morning! I like to make fun coffees, but don’t like to clutter up my counter with the cappuccino maker. All you need for frothed milk is a little pan and a good whisk. I warmed up some milk in the pan with a little cinnamon in it and then whisked it to a frothy state.

So this breakfast was a little higher in calories than my usual breakfast, but it added warmth and sweetness to a rainy Monday morning and it also made the house smell like a bakery.

Kendall Egan
Posted by Gluten-Free Living at 12:37 PM No comments: 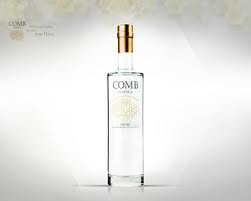 I think of vodka as one of those “safe” alcohols in terms of gluten, but this particular vodka really is safe because it is distilled from a honey base. I had heard about it through connections right here in my home town but only tried it when I went to a burger place in a neighboring town that has hundreds of craft beers. This burger place did have a gluten-free beer, but I wasn’t really in the mood for a filling beer when I was going to be stuffing my face with a burger and French fries.

I saw the Comb Vodka and ordered it with soda and a lime. It was really refreshing and really hit the spot with my burger choice! The vodka is smooth, with a hint of sweet that paired nicely with a squeeze of lime.

Some vodkas just make you shiver when you taste it because the alcohol is so overpowering. I’m not sure that is related to price tag or ingredients! Comb Vodka is a real find when you just don’t want a cider or a beer or a glass of wine. So, it’s time to power down and start the weekend. I will be ordering regular pizza and gluten free pizzas to be delivered just after the last soccer practice ends and then mixing up a lovely cocktail to switch into a mellower mood. 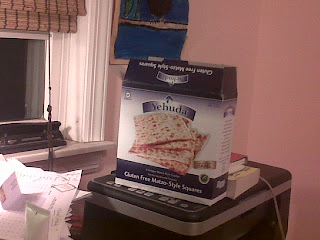 Days like today are so quiet at work and it is a wonderful time to catch up. I have put files together and sorted out big piles of paper and drafted some marketing ideas. The sun was shining through my window, the kids were busy enjoying the warm day and, for me, today was a gift of a quiet phone and quiet email inbox.

The other thing that I have accomplished was pretty much scarfing down this entire box of gluten-free matzo while sitting at my desk! I wish I could find these easily all year long because this matzo is delicious. For those of us who have missed a “saltine” style of cracker, the Yehuda gluten-free matzo are light, crisp and salty. Of course, they serve a much higher purpose than a much loved salty snack for a celiac!

I hope everyone enjoys family time this weekend at Passover and Easter celebrations. Come Monday, I will have way too much Easter candy tempting me so I am going to run out and stock up a few boxes of gluten-free matzo!